Hydraulic power is used in a variety of applications such as pumps, motors and valves. The mechanical power can be generated in various ways, and electrical as well as pneumatic systems are alternatives to hydraulic power generation systems.
The cooling of hydraulic oil with water is the largest industrial application for BPHEs. This chapter discusses the general function of such systems, the main hydraulic components and the applications of BPHEs in that field.

Force applied at one point can be transmitted to another point by using an incompressible fluid. The fluid is almost always an oil of some sort. The force is almost always multiplied in the process (see Figure 5.1).

The terms force and pressure are used extensively in the study of fluid power. It is essential to distinguish between these terms. Force means a push or pull exerted against the total area of a particular surface, and is expressed in kilograms or pounds. Pressure means the amount of force applied to each unit area of the surface, and is expressed in N/m². Pressure may be exerted in one direction, in several directions or in all directions. The formula used in computing force, pressure and area in hydraulic systems is:

Incompressibility and Expansion of Liquids

For all practical purposes, fluids are incompressible. Under extremely high pressures the volume of a fluid can be decreased somewhat, though the decrease is so slight that it is often considered negligible. However, liquids expand and contract as a result of temperature changes. When a liquid in a closed container is subjected to high temperatures, it expands and exerts pressure on the walls of the container. It is therefore necessary that pressure-relief mechanisms and expansion chambers are incorporated into hydraulic systems. Without these precautionary measures, the expanding fluid could exert sufficient pressure to rupture the system.

Transmission of Forces through Liquids

The fundamental law in the science of hydraulics is known as Pascal’s Law. It implies that pressure on a confined fluid is transmitted undiminished in every direction, and acts with equal force on equal areas, throughout the confining vessel or system (see Figure 5.1). 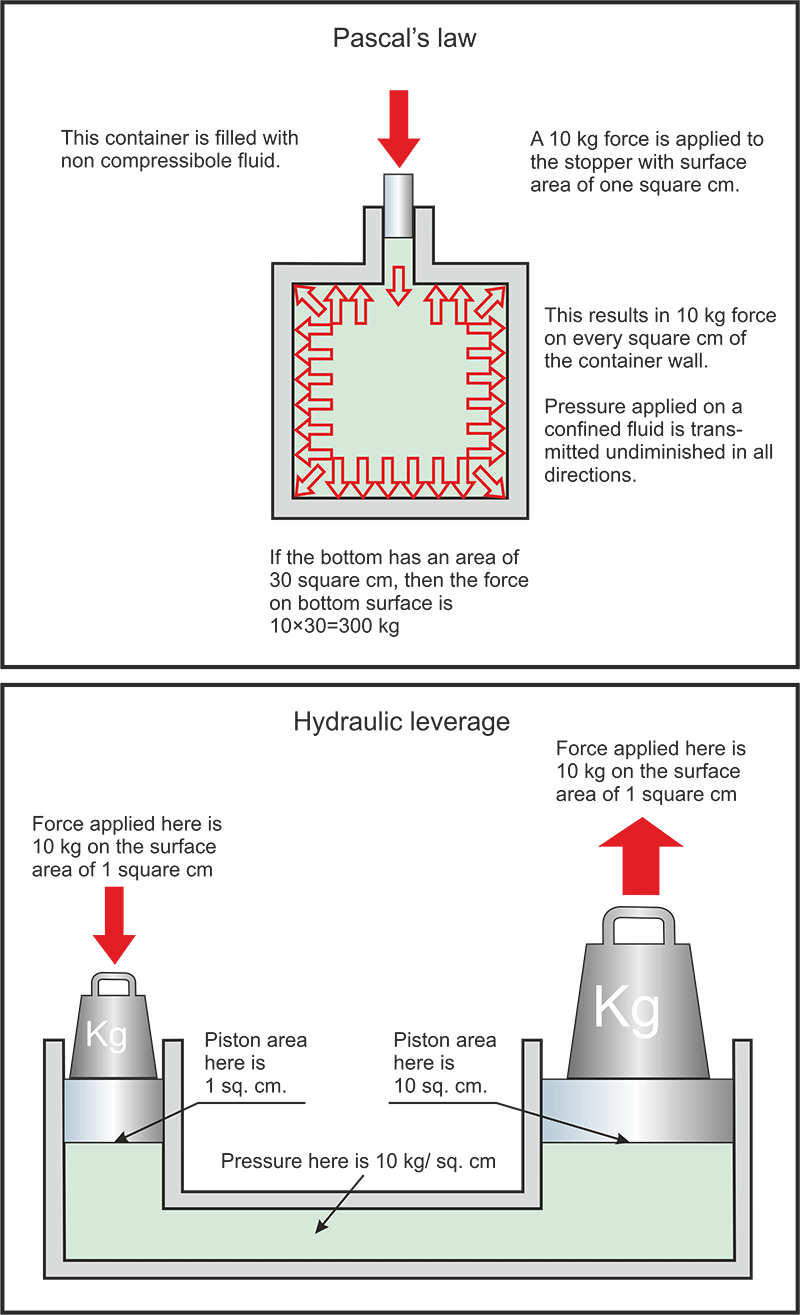 The pipe connecting the two piston areas in Figure 5.1 can be any length and shape, enabling it to take any route between the two pistons. The pipe can also branch, enabling one master cylinder to drive more than one slave cylinder if desired.

It is very easy to add force multiplication (or division) to the system. Trading force for distance is very common in mechanical systems. In a hydraulic system, only the size of one piston relative to the other need be changed.

A hydraulic system can be broken down into five main parts, four of which are analogous with the four main divisions in an electrical system. First, the hydraulic power unit parallels the electricity generating station; second, the control valves parallel the switches, resistors, timers, etc.; third, the lines in which the fluid power flows parallel the electric power lines; and fourth, the fluid power motor parallels the electric motors. The fifth part is the oil cooler, a part with no analog in an electrical system. Figure 5.2 shows the process chart for a typical hydraulic system.

The basic unit contains a hydraulic pump with a suction strainer or filter, an accumulator with a cover, a motor coupling, an electric motor, a pressure gauge, a relief valve, hydraulic oil and the necessary internal piping. The two most important components, the pump and the accumulator, are described below.

Hydraulic pumps (see Figure 5.3) deliver a flow of high-pressure fluid to the pump outlet. Powered by mechanical energy sources, hydraulic pumps use gears, vanes, pistons and various other devices to pressurize fluid. When hydraulic pumps are supplied with pressurized fluid, they rotate in the reverse direction and act as motors. Hydraulic pumps have applications in all types of low- and high-pressure testing, and oilfield uses such as removing cores from core barrels, and testing valves and fittings. They are simple to construct and operate, and are quite flexible with excellent performance. 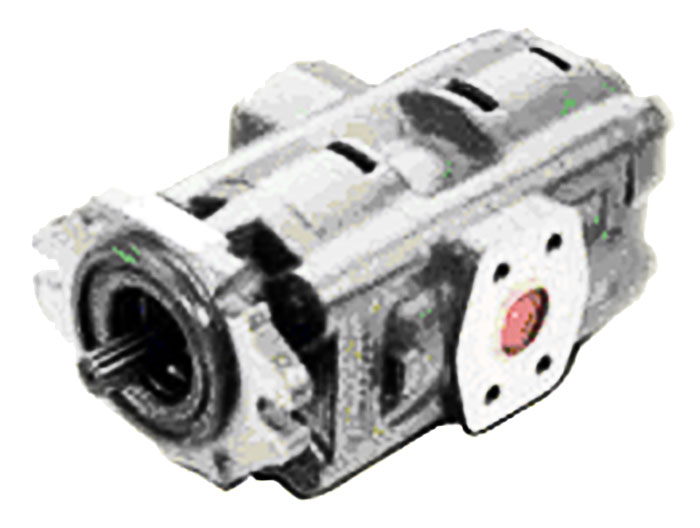 Hydraulic valves (see Figure 5.5) control and direct the oil from the time it leaves the hydraulic pump until it starts on its return to the accumulator after being cooled in the oil cooler.

The type of valve employed depends upon the design of the circuit. In a very simple circuit, as shown in Figure 5.2, the only valve used will probably be the master control valve. In a complex circuit the oil may flow through reducing valves, flow control valves and several others before it finally returns to the accumulator.

Hydraulic valves as used in industrial applications are available in several pressure ranges. The majority of current applications are in the range of 1 to 100 bar, but the trend is towards higher pressures. Various types of valves are used in hydraulic systems to control or regulate the flow medium. Valves are expected to control: 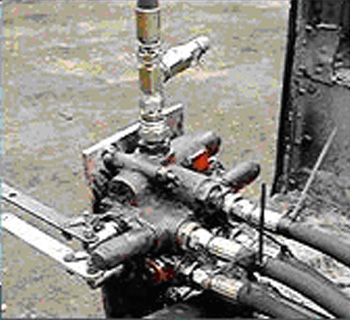 Although fluid power lines play an important part in the fluid power system, often very little consideration is given to the piping layout.

When the piping for a system is designed, four basic requirements should be taken into consideration:

This allows the fluid to flow with minimal friction. Friction causes heat and loss of efficiency.

Short lines between the master control valve and the power cylinder are advisable to reduce the time lag in the system.

When oil flowing at high velocity through a pipe is suddenly stopped due to the action of a valve, or a cylinder reaching the end of its stroke, any bends in the pipe have a tendency to straighten out.

Dirt, rust and scale can quickly get into systems, causing considerable damage to the precision-made components.

Hydraulic cylinders receive the fluid pressure from the lines and convert it into linear force. These cylinders, often referred to as jacks or rams, may be divided into two distinct types: rotating and non-rotating.

In hydraulic applications as varied as hamburger machines and tunnel drills, oil cooling is provided by means of water or brine in heat exchangers such as SWEP BPHEs.

It is generally agreed that the operating temperature, i.e. the temperature of the oil in the accumulator, should not exceed a specified limit. This limit may be exceeded if the ambient temperature is too high.

There are several methods for reducing the temperature of the hydraulic oil. One method is to provide larger oil reservoirs for the power unit. However, even with larger reservoirs it may not be possible to dissipate sufficient heat.

Another method is to place a coil of copper tubing in the oil reservoir, and circulate cold water through this coil. This method is rather impractical because the coil occupies space in the reservoir, and condensation often forms, which then mixes with the oil.

The location of the heat exchanger in the system depends upon the conditions that cause the increase in temperature. If the increase is caused by a large volume of high-pressure oil spilling through the relief valve, then the heat exchanger should be placed in the exhaust line that runs from the exhaust port of the relief valve to the oil reservoir. This will dissipate the oil’s excess heat before the oil returns to the reservoir. A common error in this situation is to place the heat exchanger in the system’s return line instead. In this situation the large volume of hot oil spilling through the relief valve is not cooled, and the temperature in the reservoir increases quickly.

However, a heat exchanger in the system’s return line is of value if the heating is caused by friction in the piping, restriction, or an external source. Figure 5.6 illustrates the correct usage for these two cases. Generally it is important to study the complete system carefully before locating the heat exchanger. 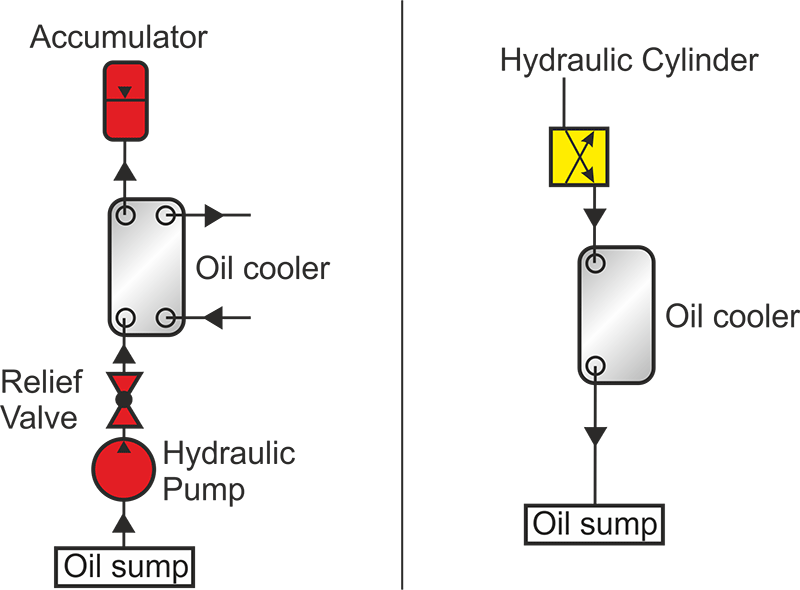 A typical application for a BPBE in the field of hydraulic oil cooling is the hamburger press, shown in Figure 5.7.

The hydraulic oil is cooled by water in a BPHE, which in this illustration is a SWEP B8. 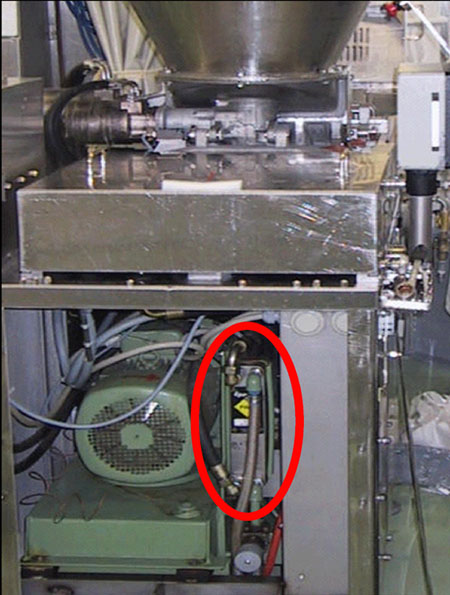 The hydraulic oil cannot be cooled with air in this application because of the requirements of the process. The hamburgers are pressed in an ambient temperature of around 8 ºC. If an air coil were used to cool the hydraulic oil, the warmed air would enter the ambient air, and the necessary conditions for the process would be no longer be fulfilled.

Normally, the maximum pressure drop for oils in oil coolers is above 100 kPa.